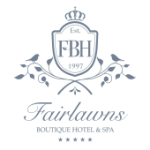 Before Fairlawns became a boutique hotel in 1997, it was originally a ten-acre family home, owned by the Brenthurst Trust of Oppenheimer fame, sporting stables, a training rink, a cow (just one), geese, dogs, and two teenage children. In 1994 the eastern section bounding on Bowling Ave was sold to developers and the residential estate known as Camelot was built on the site. An offer from developers for the western section took a bit more soul-searching before being sold as it meant loosing not only an historical cottage, but the lunge rink and grazing, which in effect meant parting with the horses.